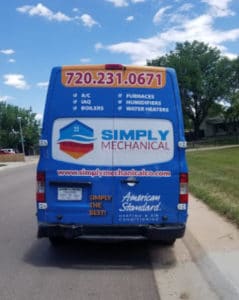 When our technicians pulled out the old, 1934 boiler from the basement of a Littleton house, they found a newspaper stuck underneath it from 1923. After speaking with the owner of the house, we learned the rich history of what occurred in the building, and how the boiler played into that history.

Out with the Old: 1934 American Standard Boiler

It was a 1934 American Standard model, one that was released right after the company was named American Standard. Prior to that it was ARCO (American Radiator Company). ARCO dominated the boiler scene early on when coal-fired steam heating began in the 1800s. After the Spanish flu, ARCO merged with American Sanitation, and they then became American Standard.

It was originally a coal fired boiler, and then was converted to fuel oil after WWII. Later it converted over to natural gas when that became the norm in Colorado.

Fun fact: The second building in the US to have central heating installed in it was the White House.

In With the New: Dunkirk PSB4 Steam Boiler

Our boiler specialists installed a Dunkirk PSB4 model, a steam boiler with 4 horsepower; which is a good amount of horsepower, or pull, for a residential application.

Fun fact: Modern boilers feature what’s called a Hartford Loop or “Underwriters Loop” that is a safety measure to prevent explosions. Back in the day, when boilers were coal-fired, the boiler could overheat, gain in pressure, and push the water out of the belly of the boiler, which could happen especially if there was too much coal in there. Then the dry heat exchanger would get red hot, and when the water finally did exceed the pressure, the boiler exploded.

Boiler explosions were so common back when the models were coal-fired that someone once calculated that there was once a boiler explosion in the US once every 36 hours.

Consequently, the Hartford Insurance Company paid for research to be conducted to see how boiler safety could be improved. The Hartford Loop came out of this research. The way the Hartford Loop works is by easing pressure off the header through a little pea trap that traps water, and as the boiler gains in pressure it pushes against the negative side of the boiler to prevent that water from leaving.

Benefits of the New Model

In addition to the Hartford Loop, the Dunkirk features another safety measure. There is redundancy in low-water cutoffs, so there are two different styles of low-water cutoffs used in the boiler to make certain that there’s liquid water in the belly of the boiler before that fire turns on.

Dunkirk comes standard with a modern pressure device to ensure it’s not over pressurizing.

Another feature is the flu damper. That flu damper will open when there’s a call for flame to the boiler. It prevents a cold air downdraft from outdoors on cold days. You don’t want cold air blowing across the heat exchanger and down the chimney because that cools off the heat exchanger and makes it to where more energy is used in the boiler to get it hot again. So, the flu damper increases the efficiency rate by a significant amount and prevents unneeded waste.

Unique Aspects of this Particular Job

The house where the boiler resides was an important building in Littleton, CO in the early 1900s. The owner of the house was a member of the Littleton Fire Department and he had expertise in machining. He created a homemade machine shop and would make the pipe fitting and assembly for all of the fire engines in Littleton. They were basically building fire engines from scratch back then.

Fun Fact: Our boiler specialists learned that the piping for that original steam boiler was hand-built by the owner as well!

Later, in the mid-1970s, school trips would visit the home to teach the kids about how the fire trucks were hand-built. Of course the machine shop wasn’t in use anymore but the equipment was still there, as was that old American Standard boiler, which was pointed out on the tour since it had hand-made parts.

When we replaced the boiler, the owners of the building donated the boiler clinker door and pressure device to the Littleton museum.