Posted by Stephen on Nov 12, 2021 in Air Conditioners, Furnace 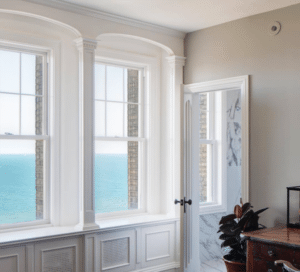 If it seems like you’re hearing the term “high velocity HVAC” more often, it’s not your imagination. It’s coming up in the HVAC world more and more for a few reasons: the benefits it offers homeowners, the ease of installation, and the energy efficiency it provides.

What Is a High Velocity HVAC System?

Unlike traditional HVAC systems, high velocity systems do not use large, rectangular ductwork. Instead, flexible tubes approximately two inches in diameter come off one larger feed, and thread through the walls and ceiling to push air through a small, circular hole. Typically, the air vent hole is in the ceiling and sends air downward, but the vents can be placed in the floor or on walls as well. The air comes out at such a speed that it causes what’s called the Venturi effect.

According to Wikipedia, the Venturi effect is:

The reduction in fluid pressure that results when a fluid flows through a constricted section (or choke) of a pipe. The Venturi effect is named after its discoverer, the 18th century Italian physicist, Giovanni Battista Venturi.

This effect causes the air to swirl around and stir up all of the air in the room. Even one small air vent does a tremendous job of distributing warm or cool air due to the induced motion of air in the room. The term high velocity can be a bit misleading; the system is not loud or disruptive, it’s rather quiet.

While air vents are placed in every room that’s being heated or cooled, only one return air vent is necessary for the entire floor.

The diameter of an air vent for a high velocity system is about five inches, and within it is a half dollar-sized hole.

The Benefits of High Velocity HVAC

There are many benefits to high velocity systems and many of them center around practicality and aesthetics.

Let’s say for example that you live in an old, beautiful, Victorian home heated by a boiler, and you’re ready to install air conditioning. It’s not preferable, structurally, or financially, to tear into your walls and ceilings to install traditional ductwork, and you likely don’t want to see a large piece of equipment like a ductless mini-split hanging on the wall in your living room.

The small, flexible tubes used with a high velocity system allow placement inside of walls in areas that standard metallic ducts and registers wouldn’t normally fit.

In general, equipment for a high velocity system is small and integrates well into a home, while still being extremely functional.

Due to the Venturi effect that high velocity systems create with the air, they are a great way to dump a lot of energy into a space, eliminating the need for a return air vent in every room. The heat gain in a room can be overcome by dumping enough cool air in with the Venturi Effect. Unlike in a ducted system, every cubic feet of air doesn’t have to go into the return vent at some point, be heated or cooled, and replaced back into the space.

Ability to Create Zones Throughout House

A high velocity system can be zoned, making for a more universally comfortable home, and providing energy savings. This is because family members have different temperature preferences, and because most homes have a room that’s always too hot or too cold. A zoned system allows certain areas or rooms to be a different temperature than others, which is especially helpful for lesser used or unoccupied rooms.

The energy efficiency of high velocity systems is noteworthy. The system is hydronically driven (transfer of heat by a circulating fluid) when used for heat, and water is a vastly superior medium for the energy. These systems partner well with a potable water, on-demand water heater, as well as a heat pump. A technician can power the hydronic coil off the on-demand water heater which is already quite efficient, and the homeowner really gets a lot of bang for their buck.

When most people think about an HVAC system, aesthetics aren’t the first thing that comes to mind. We’re used to accepting the fact that HVAC usually requires large and intrusive equipment. But with a high velocity system, homeowners can almost forget they even have HVAC, as it utilizes the most decorative space with the least mechanical space/equipment. It’s not taking up space in the room with multiple vents or a wall unit.

Additionally, the surface area of the vent can be decorative. There are different finishes available such as wood, plastic, and different colors available.

A high velocity system can go into any home, but it’s seen more in new builds than in retrofits. If an existing house already has traditional ductwork, high velocity wouldn’t be as practical for an HVAC upgrade, due to the level of effort needed to extract the old ductwork.

However, during an in-depth remodel, in which the inside of the walls are exposed, the old ductwork is much easier to tear out.

High velocity HVAC can be a great fit for a home that has a boiler, and no ductwork; making the installation of the tubing easy and practical.

When implemented, and if designed appropriately, a high velocity system will make every room in the house comfortable.

To learn more about the equipment used in high velocity systems, visit SpacePak a quality manufacturer from which we source equipment.