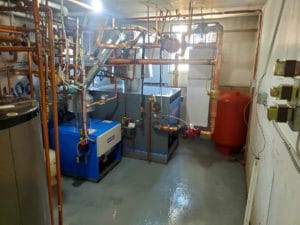 We recently replaced an American Standard boiler from 1972 in a Lakewood, Colorado apartment building and it was quite the job! Old, hydronic boilers are big, heavy, and require a lot of effort to remove. Read on to see how we brought this 32-unit apartment building up to modern safety standards and installed a new, more energy efficient system.

Most everyone has heard of Purdue University boilermakers. But have you ever noticed that Purdue’s human mascot, Purdue Pete (their true mascot is a train engine), is always carrying a sledgehammer? There’s a reason for that. Old boilers have large, heavy columns that make up the heat exchanger. At this Lakewood apartment, the boiler had five of those columns, each weighing 500-600lbs. They are just too heavy to safely move in one piece. Enter: the sledgehammer. Our technicians break apart the boiler and take it out in pieces.

When Two Boilers are Better Than One

The boiler in this apartment building used 1.2M BTUs and served 32 separate apartments. It was providing heating as well as potable hot water. The United States used to focus so little on energy and conservation. For example, 1.2M BTUs firing in July just to heat up shower water is an excessive use of energy. That much energy short cycling is very wasteful. In a multi-family dwelling, everyone has different heating needs and thresholds, at different times. The boiler really only needs to go full force about 0.5% of the year.

The challenge in this case was how to separate out the two different needs: potable hot water, and dwelling heat. Our team installed two separate boilers and connected them in a staging situation where there’s an ambient switch. This is sometimes called a ‘daisy chain’. During the rare times that it’s very cold outside, say five degrees, the potable water boiler will engage in the primary loop of the building to help with heating. But that only happens when needed.

More often today, heating aims to focus the energy that we’re using towards the direct use.

We installed two Allied boilers, both two-stage, the smaller one using 310 BTUs, and the larger one using 810 BTUs. While the old boiler was probably working with approximately 60% efficiency, the new system will be about 83% efficient. Why not closer to 100% you might ask? A boiler is not running at maximum efficiency until it hits its ‘steady state’, and large boilers take a long time to reach that state. That’s because when it comes on from room temperature, the heat exchanger, burner, and the piping is cold. Until the boiler runs a while and everything heats up, it’s not running at efficiency.

That being said, we did choose low mass boilers that hit a steady state quicker. This new system will likely take 40% off their energy bill, and they can expect an approximate 25% decrease in their energy consumption.

A New Boiler is a Safe Boiler

In addition to the boiler units themselves, our team modified the near boiler piping and components, and upgraded everything to modern safety standards. HVAC technology and safety standards have improved by leaps and bounds since 1972, so this building owner can rest easy knowing all is safe for the residents.

Learn About Our Expert Boiler Replacement and Installation Services