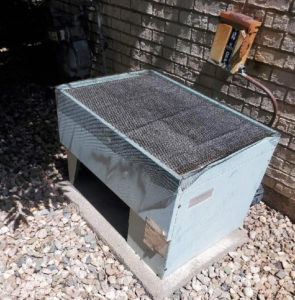 Sometimes, our technicians go on an air conditioning repair visit and find an unexpected issue. In this case, it was a 30+ year-old air conditioner that had most definitely lost its cool–in more ways than one.

The homeowners had experienced the breaker tripping on their electrical box several times and after a brief inspection, our technician found out why. Over three decades, the ground on which the unit sits had settled. This caused the unit to sink downward, and gradually pull on the conduit above it, which contains the electrical wires. As time went on, the conduit was pulled taut, had a good amount of weight and stress on it, and eventually separated from its connection.

Then, aided by vibration, stress, and condensation, the edge of the conduit rubbed away at the coating on the electrical wires. This exposed the wires beneath and created metal on metal contact.

This caused a massive electrical short. A direct short to ground caused an electrical flare up and tripped the breaker to shut down the unit.

Besides the obvious concerns of an air conditioner that continually trips the electrical breaker, there are some major risks involved when old units are affected by the elements. In this case, with electrical wires exposed and shorting out, anyone doing work or playing next to the unit could have been injured. The conduit was energizing the entire unit, which means if someone had touched the unit, or placed a item leaning against it, they could have been shocked. Additionally, if anything flammable had been stored or set close to the unit, the sparks from the wires could have started a fire.

You can only push air conditioning units so far! Especially if there are outside factors such as land settling over a long period of time. The general life expectancy of an air conditioning unit is about 20 years. When homeowners hold onto a unit for too long it makes it hard to predict what might happen.

Learn About Our Expert Air Conditioning Replacement and Installation Service